All the New Weapons in Destiny 2: Season of the Haunted

Destiny 2 is all about chasing the latest and greatest loot. And for that reason, you can expect Bungie to release exciting new weapons every season.

This guide will help you keep track of all the shiny new weapons this season, including Exotics, brand-new seasonal weapons, and returning fan favorites.

Season of the Haunted Exotic weapons

Season of the Haunted Weapons: Legendaries

These are all the latest weapons released with Season of the Haunted (S17) on May 25, 2022 (if you’re looking for the most recent Exotics, this guide covers both Exotic weapons and armor):

These weapons can be farmed by completing Psi Ops Battlegrounds or focusing Umbral Engrams.

These weapons are on a daily rotation and can be infinitely farmed too. You can find the exact rotation per day, drop rates, and a complete tier list below:

These weapons can be infinitely farmed too. However, unlike dungeons and raids, they are on a weekly rotation. You can find the exact rotation per week, drop rates, and a complete tier list below:

These weapons can be easily target-farmed thanks to Saint-14’s new reputation system. In exchange for some resources, you can take a Trials engram and convert it into exactly the weapon (or armor) you want. You can find a complete Tier list and the weekly rotation for Flawless weapons below:

These weapons can be acquired by completing Iron Banner matches and turning in Iron Banner tokens.

These weapons can be acquired by completing activities from the Vanguard, Crucible, and Gambit playlists.

These weapons can be randomly acquired as end-of-match activities or via Legendary and Prime engrams.

New Perks in Season of the Haunted (coming soon)

You can find a complete list including all weapon perks below:

How to get new weapons in Destiny 2

When it comes to finding the new guns, though, the methods to acquire them are much more limited:

Each encounter of each dungeon and raid has a chance to drop specific loot. This makes it possible to actively farm for the weapon you’re looking for. Be aware that raids are locked to one clear per week per character, giving you a maximum of three chances to get what you want per week. Grasp of Avarice is one of two exceptions to this rule: It can be farmed indefinitely.

Trials of Osiris has gone through many ups and downs. Mostly downs if we’re being honest. But the one thing it has always gotten right is the loot, namely its weapons. Trials of Osiris weapons are notoriously good. Often best in class.

As the ultimate endgame PVP activity in Destiny 2, Trials of Osiris has excellent weapons to offer. And since the start of Season of the Lost (this season), the system to earn loot and target farm rewards has been greatly improved. In fact, Trials features perhaps the best system to target farm exactly the weapons you want.

Even if you hate Trials, its weapons are well worth it. Trust me, your time will be well spent, especially when Trials: Freelance is available. This guide covers every Trials weapon, including Adept versions and their rotation.

Bungie has made a lot of efforts to improve Destiny 2’s loot this past year. And they’ve vastly improved the associated grind too. Nightfall weapons are perhaps one of the best examples.

One of the most challenging activities in the game (when playing on Master and Grandmaster difficulty), Nightfalls finally have the loot to properly reward you for your efforts. Nightfalls now reward unique weapons that can’t be found elsewhere, and some of them are real bangers.

Farming them is straightforward but the drop rates are rough and you’ll want to only play Master and Grandmaster Nightfalls if you want to efficiently farm for weapons. This guide covers every Nightfall weapon, their weekly rotation, and more.

Some of the best weapons in the game are Exotics. These being special items, they often require you to complete cool and unique missions to acquire them. This guide includes every Exotic quest in the game and provides you with their requirements and video guides to help you complete them.

Unfortunately, many Exotic quests have been removed from the game and put into the Destiny Content Vault. Those weapons can still be acquired but they now have to be purchased for a hefty price at the Monument to Lost Lights in the Tower, also referred to as the Exotics kiosk. This resource page includes every Exotic Kiosk weapon and its cost.

Taking into account that every new Season costs $10, Bungie will obviously spend a lot of time creating exciting activities and enticing weapons to convince you to buy the season. Therefore, you can expect seasonal weapons to be above average. In fact, every season will come with a handful of top-tier weapons to keep you grinding.

Now that Seasonal content lasts for an entire year, there are too many activities to list here. You can refer to the two tables below for a complete view of every Seasonal activity currently available and what weapons they each offer.

There’s a lot to be said about Iron Banner. The game mode feels stale and outdated and it features perhaps the worst farming system in the entire game.

Indeed, whereas Trials of Osiris now lets you target-farm specific weapons, Iron Banner still uses the same archaic tokens system it has for years. Turn in tokens to get an Iron Banner reward. With 18 weapons and an armor set in the loot pool, getting the weapon you want is extremely difficult… And that’s a shame because some of the newer Iron Banner weapons are very good.

Playlist activities used to be the less rewarding activities in the entire game. Nowadays, they all offer unique weapons to each mode, and some of them are actually quite good.

Bungie usually adds 2 new weapons for each activity per season. With currently 6 weapons available per mode, it isn’t easy to target-farm these. Plus, each weapon has an enormous perk pool, which makes finding a god roll nearly impossible… On the flip side, drop rates are slightly higher than before, and if you use the right Ghost mod, you’ll be surprised by the number of Playlist weapons you’ll amass over time.

There are four events in Destiny 2 in any given year: The Dawning for Christmas, Festival of the Lost for Halloween, Guardian Games, and Solstice of Heroes.

Limited in time by nature, this means you have only a couple of weeks to farm these event-specific weapons per year. The good news is that farming these is quite easy: The loot pools are very small and the drop rates are decent enough to guarantee a few good rolls if you take the time to participate. 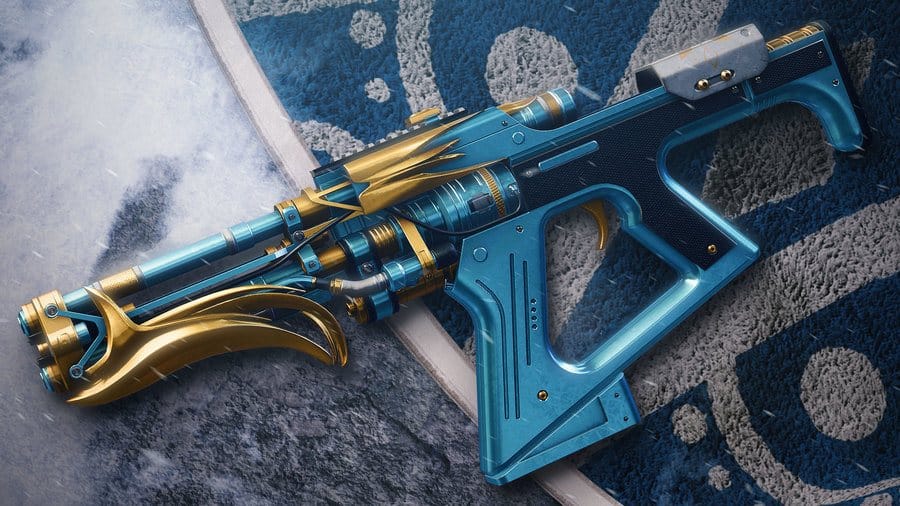 Some weapons can only be found on specific planets. These are reserved to Europa, the Moon, the Dreaming City, and the Leviathan, and drop from completing specific bounties, missions, and events occurring within those planets.

There isn’t much more to say about these. For the most part, they are average, but some of them could be considered best-in-class. To farm those, each planet offers straightforward methods to farm them. For example, completing bounties on the Moon or quests from Variks on Europa.

Finally, there are many weapons that can only drop randomly while playing the game. As you’ll see in the weapons list below, the World loot pool is enormous, which means that farming them will be extremely difficult…

But on the flip side, most of those weapons are pretty average, giving little reason to want to farm them at all. Some of those weapons are fine, and you should always think twice before dismantling them, but you will be better of target farming weapons from other sources.