The Witch Queen turned out to be even better than expected. On top of a stellar campaign, it introduced weapon crafting, a significant addition that is changing the way we chase loot in Destiny 2.

Although not every new weapon can be crafted, many are, including some excellent guns that have the potential to become best-in-class.

This guide covers every weapon that can be crafted in Destiny 2, including both Exotic and Legendary guns, as well as the best rolls for PVE and PVP.

These are all the Exotic and Legendary weapons that can be crafted (and reshaped) in Destiny 2:

If you’re low on crafting materials and are only interesting in crafting the best weapons out there, the list below all the top tier craftable weapons available today:

How to find Patterns in Destiny 2

Before being able to craft a weapon, you’ll need to unlock its Pattern first. Think of it as the weapon’s blueprint. But unlike most MMOs in which you have to find the blueprint somewhere in the wild, Patterns can be unlocked by using and attuning Deepsight Resonance weapons.

But to find a specific pattern, you need to find that specific weapon in the wild and it has to have Deepsight Resonance. Some patterns require several attunements, meaning this could be a lengthy process for some weapons.

For example, if you want the Pattern to craft the Sweet Sorrow auto rifle, you’ll need to find and attune 5 different Sweet Sorrows found in the wild and each one has to have Deepsight Resonance! 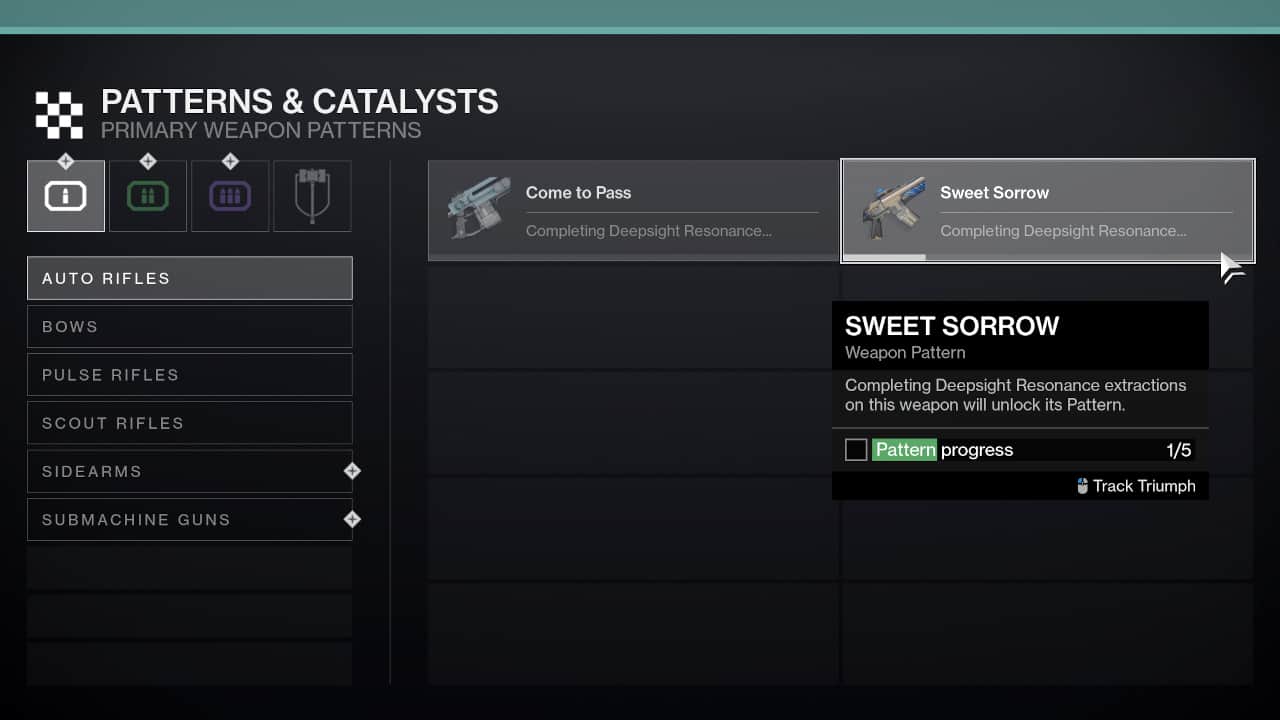 Bungie has recognized that the grind required right now is too long and is already looking to improve the situation.

Crafting weapons in Destiny 2 requires specific materials. Note that crafting materials still have somewhat restrictive caps, in spite of being already increased by Bungie, but luckily most materials were completely removed at the start of this Season:

We are removing Ruinous, Adroit, Mutable, Drowned, and Energetic elements. Only Neutral Elements will remain.

These are all the different materials you need to craft weapons in Destiny 2 as of today:

You can view your current materials by opening your inventory and hovering over an item called “Relic Tether” (not the most elegant solution but still better than nothing!): 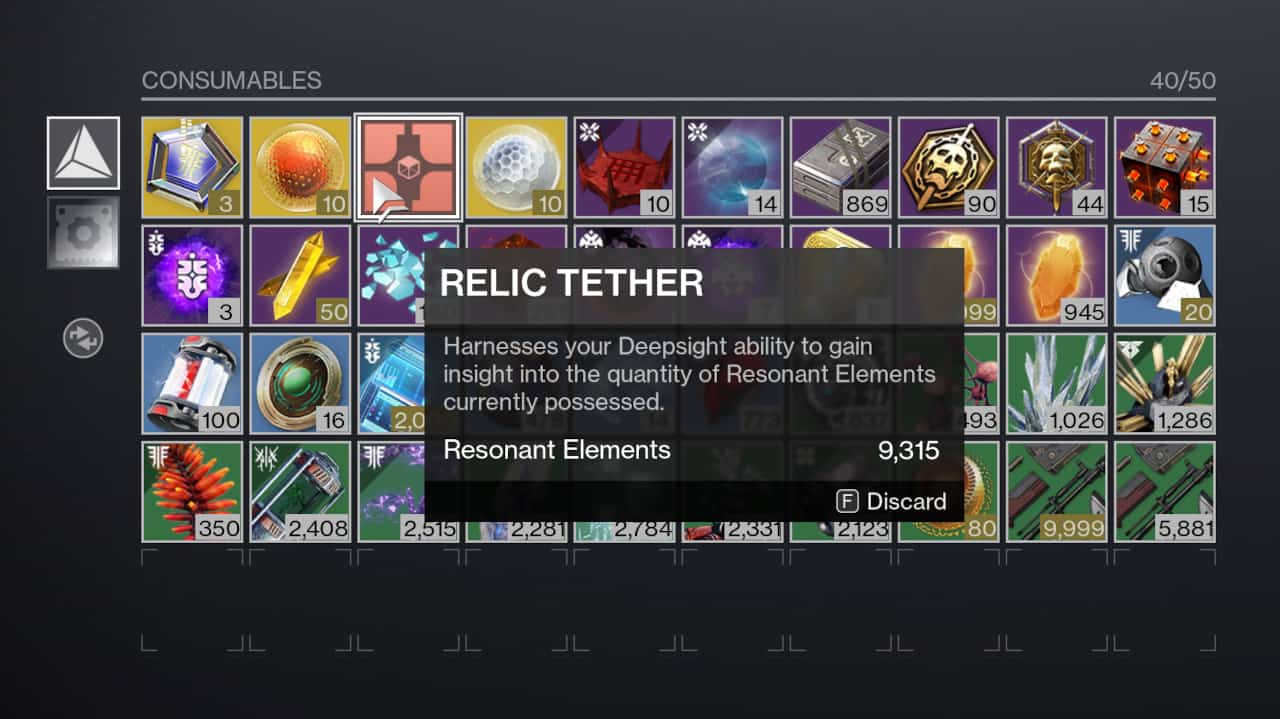 How to craft weapons in Destiny 2

While many guides about weapon crafting in Destiny 2 have been already published, I feel they are unnecessarily complicated. Weapon crafting can seem daunting at first, but once you have understood its principles, the system is surprisingly straightforward. Bungie is definitely improving on that front too!

These are the simple steps required to craft weapons in Destiny 2:

1. Go to the Enclave and complete the introductory quest

This is extremely straightforward. All you’ll need to do is go to the Relic in the Enclave (located in the Throne World), get the introductory quest and follow the different quest steps.

2. Find and use weapons with Deepsight Resonance

While playing the game you’ll receive several guns as random drops or activity rewards. Some of those weapons will have Deepsight Resonance. These are the weapons that have a red border around them on your Character’s inventory. 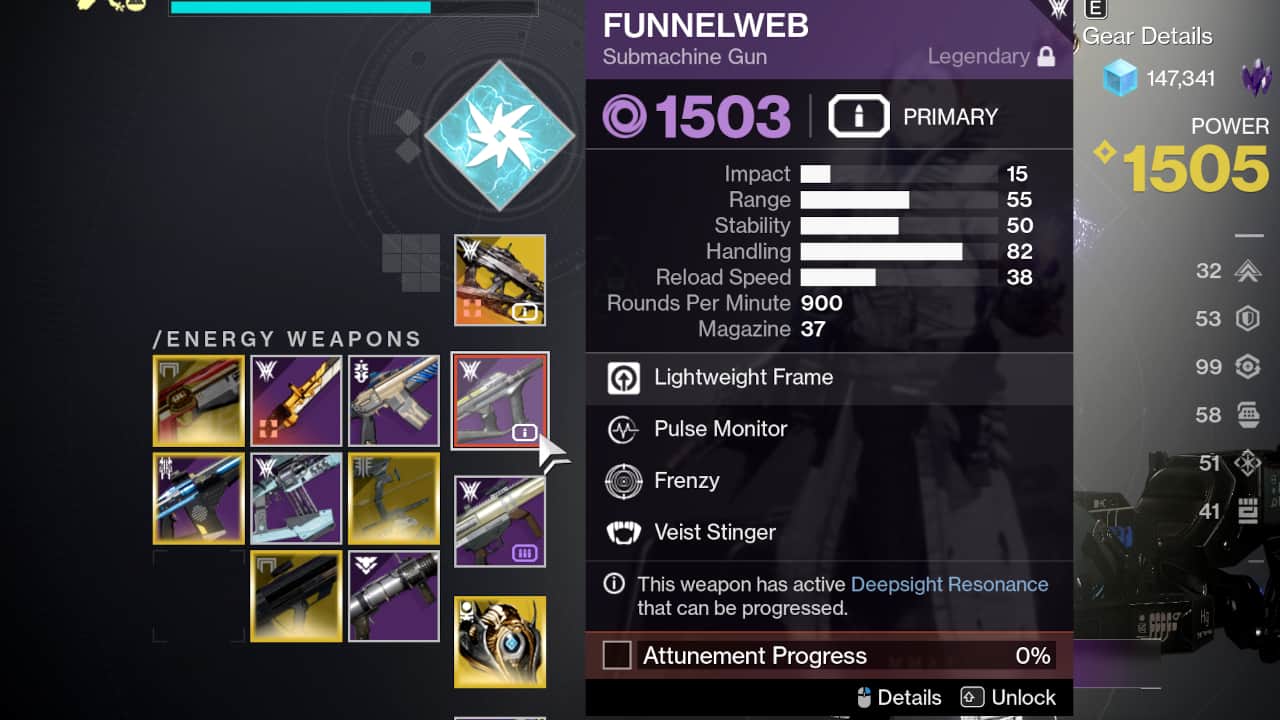 To “attune” them, you only have to use them to kill things until the progress bar reaches 0

We covered this part before.

Almost any weapon can drop with Deepsight Resonance, even older weapons that can’t be crafted. It doesn’t matter. You’ll still want to attune every weapon you can because even if they won’t help you get patterns, they will still give you valuable crafting materials.

Bottom line: Attune every Deepsight Resonance weapon you get your hands on.

5. Craft and reshape weapons at the Relic

Once you have unlocked a few Patterns (you can track this on your Triumphs page, in the “Patterns & Catalysts” section), you can head to the Enclave and start crafting weapons. 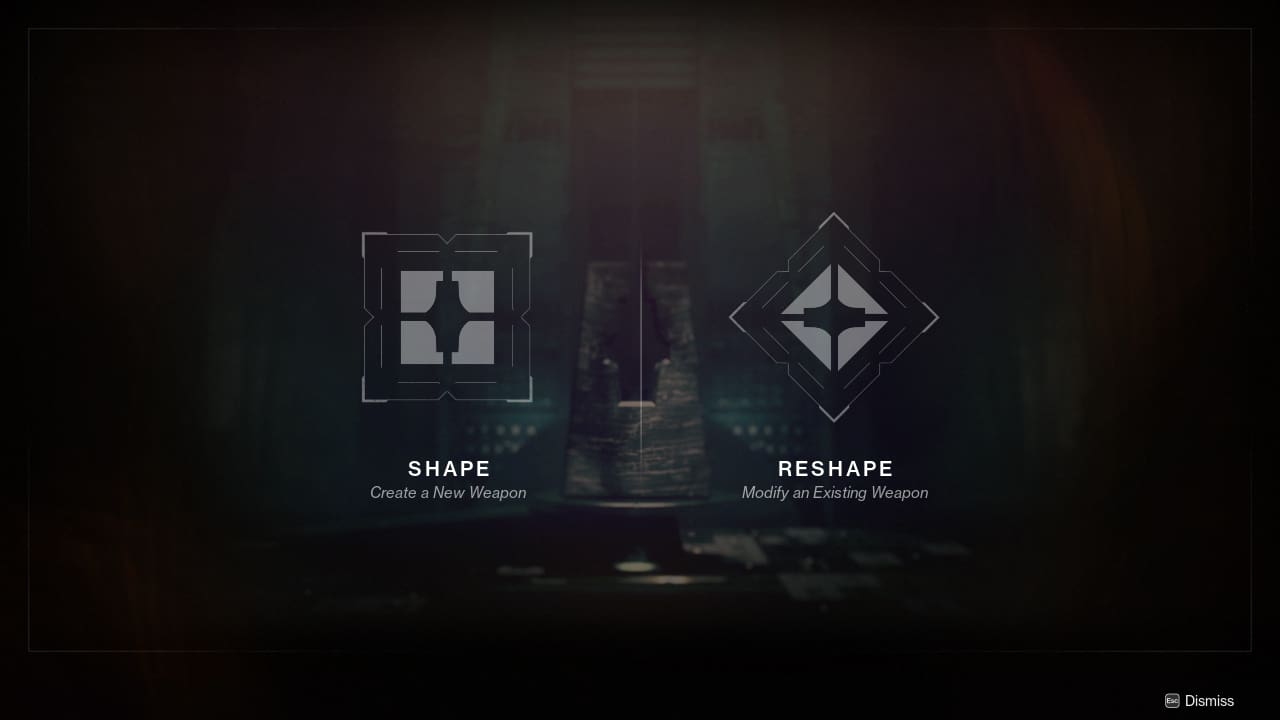 Any weapon you have crafted can be “reshaped”, meaning you can change the perks you have previously selected.

6. Use your crafted weapons to level them up

All you need to do to level up your crafted weapon is to use it. Simply shoot things with it and it will slowly level up! The more levels you gain, the more perks you’ll unlock. Heading to the Relic and reshaping the weapon will allow you to select new and improved perks.

Once you have reached level 16, every perk should be unlocked.

And there you have it. That is how you craft and reshape weapons in Destiny 2. Do you have a preferred craftable weapon already? Let us know in the comments section!