With the Beyond Light expansion in 2020, Bungie removed entire Planets, quests, and activities from the game.

Everything was put into the Destiny Content Vault (DCV), and as a result, several Exotic quests required to earn some of the best Exotic weapons were removed too. This has continued with The Witch Queen expansion and the removal of many more quests and activities…

Luckily, Bungie was quick to react and created a new system to earn those weapons: The Monument to Lost Lights.

Monument to Lost Lights Exotics list: What to get

Located at the Tower, the Monument to Lost Lights is a vendor that sells all the Exotics and Pinnacle weapons that can no longer be earned elsewhere in the game due to the removal of their original quests. Costs are high, though, requiring rare resources such as Exotic ciphers and Ascendant shards.

The list below features every Exotic offered by the Exotic kiosk and includes cost per weapon and Tier ranking to help you prioritize what weapon to get next (you can also filter and sort the list):

The Tier ranking above uses the following Tier levels:

These are some of the best Exotic weapons you can purchase from the Exotics archive:

Note that as a former raid exotic, Tarrabah requires Spoils of Conquest. More about costs and materials and below.

The Monument to Lost Lights is located in the central area of the Tower, near the Gunsmith and right next to the Vault.

Here you can see the kiosk’s exact location: 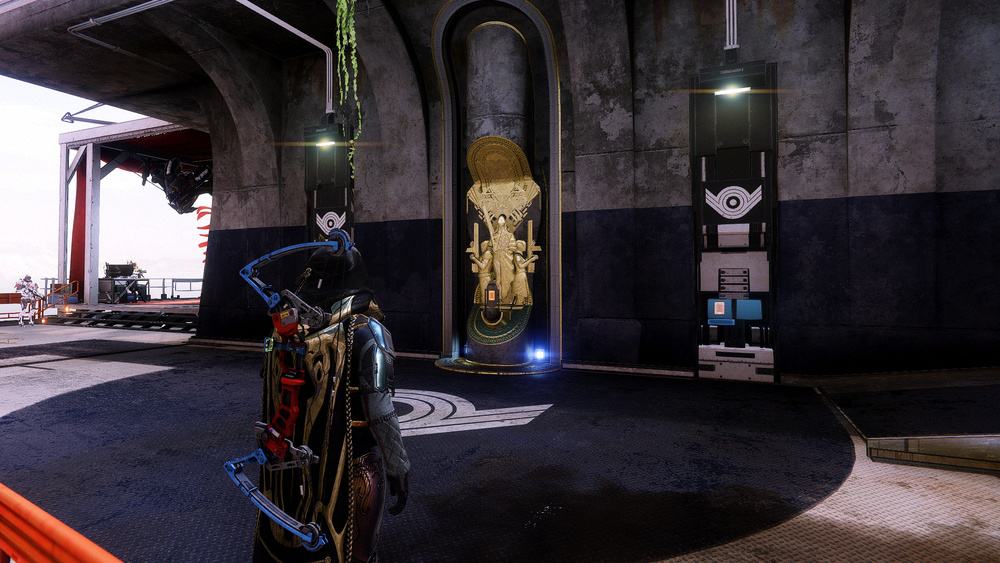 The Monument to Lost Lights in the Tower

Despite being referred to as the Exotics kiosk, the Monument to Lost Lights has more to offer.

While Exotics are the main highlights offered by the Monument to Lost Lights, this kiosk also offers Legendary weapons. To be clear, most of its Legendary weapons were sunset and are no longer viable for endgame content.

The only exception is the incredibly good shotgun, Felwinter’s Lie, which can still be purchased there. 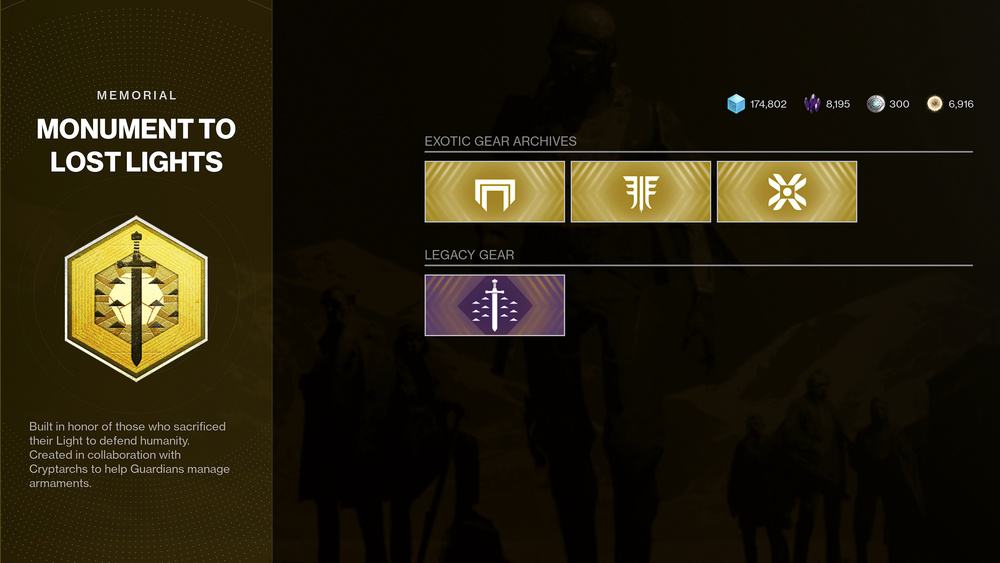 Legendaries are offered within the “Legacy gear” section

Unlike Exotic weapons, Exotic armor was not impacted by the removal of Planets and Quest last year. Therefore, you won’t find any armor at the Monument to Lost Lights.

As of today, every Catalyst that was removed and put into the DCV has returned to the game, albeit not as part of the Monument to Lost Lights. For more information about Exotic catalysts, this guide covers them all, including their effects, how to find them, and how to unlock them.

As mentioned before, these Exotics are quite expensive. Even if you’re a veteran with maxed-out glimmer and thousands of planetary resources, these weapons still require hard-to-find resources including Ascendant Shards and Exotic ciphers.

The table above includes the exact cost for every Exotic in the kiosk, but in a nutshell, this is how you can farm all the needed materials:

Exotic Ciphers are perhaps the hardest material to “farm” in the sense that you are limited to one cipher at a time per account. Currently, the only 2 ways to acquire a cipher are via a weekly quest offered by Xur and the Season Pass.

Xur’s quest itself is not hard, just long (E.g. doing 21 strikes…). Xur appears every weekend on Friday. You can track him using this neat site.

Ascendant Shards are extremely sought after because they are both valuable and hard to obtain.

They are valuable because they are needed to Masterwork armor, which means you’ll need at least 7 to Masterwork a single armor set (including an Exotic). In parallel, they are tough to farm for most players as they mostly drop from Nightfalls at high difficulties or 7 wins/flawless Trials of Osiris passages.

This brand-new material was created entirely for the Monument to Lost Lights and is required to purchase Exotics previously locked behind Raid bosses. To earn this currency, you have to complete raid encounters, which means it cannot be endlessly farmed as you can only run one raid per character per week.

So far, it seems each encounter drops 3 Spoils of War. This means you’re looking at around 20 full Raid runs to be able to purchase one of these Exotics.

Planetary resources are not hard to find. If you put the right Ghost mod, you can go right ahead and farm them. That said, most of these weapons require 100 or more resources, which could take a while to physically collect.

The other alternative is to purchase them from Spider, an NPC located in the Tangled Shore, in exchange for glimmer.

Glimmer shouldn’t need an introduction, as it’s one of the most basic currencies in the game. Virtually everything in the game rewards glimmer, so as long as you play the game, you will earn glimmer. That said, the requirements here are steep (100,000+ glimmer per weapon).

If you’re struggling, Spider can also be a good alternative to buy some glimmer in exchange for other materials.

It is undeniable that way too many Exotic quests were removed from the game and put into the DCV. Taking into account how brilliant some of them were, it is truly a shame they were replaced by a mere vendor (namely, the exotic quests for The Whisper of the Worm and Outbreak Perfected, by far the best Exotic quests ever created by Bungie).

If you have very limited resources and can only chase 1 or 2 of the impacted weapons, I would recommend either Eriana’s Vow if you’re in need of an excellent PVE weapon or Ace of Spades if you’re interested in one of the best PVP weapons in the game.

What weapon will you buy first?

Things change fast in Destiny 2, especially the Meta. The weapons we call the best one day can completely change the next. All it takes are a few minor changes on Bungie’s end. For that reason, this guide will be updated at least once per season.

The following Exotics were added to the Monument to Lost Lights: