Perdition is a below-average Lost Sector to farm as there are a few enemies that make it more difficult than most. Wyverns and Champions are the biggest threats here.

While our Lost Sectors hub features every Lost Sector in the game, this Perdition guide covers everything you need to know to prepare, including recommended loadouts, shields, and champions. 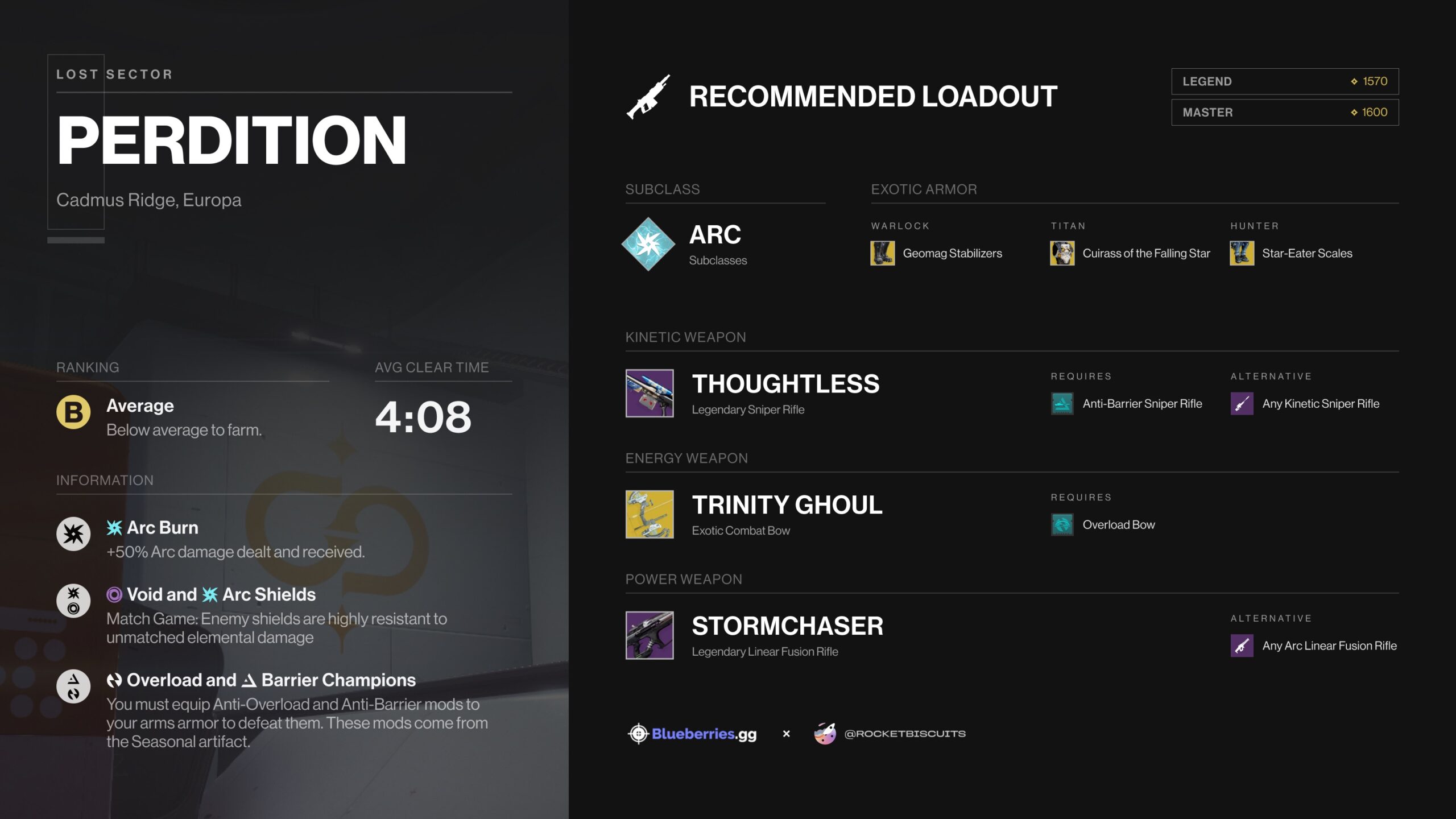 The Perdition Lost Sector is located in Cadmus Ridge, on Europa.

How to unlock Legend & Master Lost Sectors? You’ll need to complete the normal version of the Lost Sector and reach 1510 Power Level to even see them in the Director.

This is an overview of what Burn, enemies, and overall difficulty you should expect in this Lost Sector:

These are the types of Champions you’ll have to deal with:

Difficulty: Perdition is considered below average to farm, in terms of enemy difficulty and time to complete.

During Season of Plunder (S18), the best loadout is the following:

In Perdition, all of your Arc damage is increased. This makes Trinity Ghoul extremely powerful and a joy to use. With one kill, you’ll unleash storms of lightning across the battlefield and leave no one standing. It also stuns Overload Champions during the Season of Plunder.

You’ll also encounter Barrier Champions in this Lost Sector. Your Arc heavy weapon will do large damage to them before you need to break their shield with your Sniper Rifle. Both of your weapons give you the range you need to kill them from a safe distance.

Make sure to equip these mods for easy runs:

Needless to say, these aren’t easy, and the least you should do is ensure you have a reasonable Power Level. By reasonable, we mean no less than 10 Power Levels below the recommended levels. If you find yourself struggling, work on increasing your Power Level as much as possible and focus on Legend Lost Sectors.

The first half of the Lost Sector is really straightforward with Trinity Ghoul. Use its insane lightning power to eliminate ads with extreme efficiency. There’s a Void shielded Minotaur, which we found was easy to kill with an Arc Grenade and Trinity Ghoul.

Pro Tip: Kill the Hydra in this room, and you won’t have to fight it in the next room, which is much more difficult.

After the last enemy dies here, you’ll move to the most difficult room in Perdition. In here, you’ll fight swarms of enemies, Champions, and a couple of Wyverns.

Once the last enemy here dies, the boss will spawn. By this point, your Super ability is ready to be cast. The boss has so little health that it’ll die almost instantly to your Super.

If this guide had too much information and you can only remember one sentence, these are the highlights:

Featuring an Arc burn modifier, the Perdition Lost Sector features several Arc-shielded enemies and Overload and Barrier Champions. Due to its length to complete, this is a below-average Lost Sector to farm.

Hopefully, you now have everything you need to know how to best clear this Lost Sector to farm exactly the type of Exotic armor you need.