One of the biggest questions we get after a new Season is: What are the best weapons in the game now?

While we’ve answered that question before, this time we focus on every new weapon released with Bungie’s 30th Anniversary event and Season 15.

In this guide, we cover every Legendary weapon (with their respective PVP and PVE god rolls), including free-to-play, Season Pass, and Beyond Light exclusive weapons, and we tell you which ones deserve your attention the most.

A big thank you to all the amazing content creators that helped us put together this resource. Needless to say, their perk recommendations are all excellent and I’m glad they accepted to be part of this.

The list starts with the  S Tier and moves down from there:

These are the different Tier levels used for this Tier list:

The list starts with the  S Tier and moves down from there:

In case you’re still chasing Season 14 weapons, these are all the god rolls for Season of the Splicer’s legendary weapons:

For a more detailed breakthrough of some of the top weapons from Season 14, this is what some of our favorite content creators had to say: 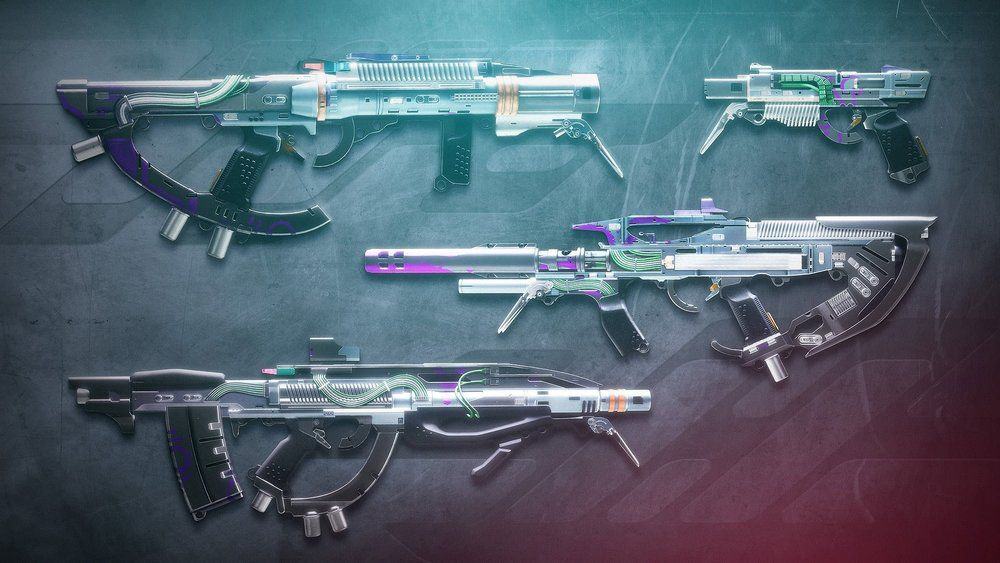 For PvE, I opted for a stable, high tempo experience to help me focus more on the killing. Tunnel Vision is one of the new weapon perks that come with Season of the Splicer, boosting ADS speed and Target Acquisition (Aim Assist) when you reload after a kill. This synergizes ridiculously well with Multikill Clip, which will ensure that as long as you stay alive, enemies will be shredded without much problem.

In PvP, I wanted to make sure the gun felt consistent over anything else. Arrowhead Brake boosts the weapon’s recoil direction to 85, minimizing recoil whilst keeping it perfectly vertical in spread. High Caliber Rounds make it harder to fight back, whilst Moving Target gives me a passive AA boost that comes in very handy. MKC is just the cherry on top after a hard day’s killing.

This weapon’s strength is incredibly consistency, ease of use, and versatility through pin point shooting, and inherently high accuracy. We’re looking to maximize on range, although we can hit shots easily outside of optimal range, we need to try and maintain damage output – range boosts and Slideshot help with that.

Surplus helps make up for another weakness of the weapon – low handling, so we can shotgun swap quickly. Otherwise, we since the 180s have less overall lethality, we want to tap into making them kill quickly on top of having great consistency & ease of use through KC & MKC allowing the weapon to 3 tap in 0.67s – and because the 180s already have such great inherent consistency, you could justify going for killing wind to make kill clip even more lethal.

This weapon is more a PVE workhorse, with the classic Reload Speed + Damage buff combo creating an experience for add clear in, ironically enough, Gambit. It pales in comparison to Huckleberry, but that’s a bit
of an unfair comparison. As for PVP, well, Aggressive Frame SMGs are stuck in a bit of a no-man’s land in the Crucible. 900 RPMs with Killclip like Multimach are generally better at the same job, while 600’s have
better Range. Rampage doesn’t get to do much in PVP due to this weapon’s magazine size, so that’s why I suggest going for consistency over kill potential.

Empty Vessel is the direct replacement of Salvager’s Salvo in my books. With it’s ability to roll with Ambitious Assassin, Damage Perks, as well as any Masterwork you want, ON TOP of being Solar to implement Warmind Cell potential, it does what Salvo does, but better. It also can roll with Blinding Nades & Disruption Break for those Endgame PvE encounters making it even more versatile

Unfortunately a member of the weakest fusion archetype, Null Composure suffers in PvP from a distinct lack of 15m+ killing ability,which is nearly required to run a fusion in a shotgun centric meta. Heating up is an excellent perk that addresses the main issue all Rapid-Fire fusions have, which is poor bolt grouping at longer range, and thus should be prioritized in PvP along with Reservoir burst, which unfortunately basically requires you to run double Scavengers to get to a full magazine so you can utilize the bonus damage.

High Impact Reserves is not recommended because the 1-2 bonus damage does nothing to change the bolts to kill, and the increase to lethal kill distance is negligible because the bolt spread is the real constraining factor. In PvE, Feeding Frenzy and Reservoir burst is a fun roll, useful in mid level content but unfortunately a lack of fusion rifle champion mods holds it back.

Non-aggressive frame shotguns struggled with consistent OHK lethality since the shotgun changes early last year. I am hoping that the extra +20 range from Iron Reach can help remedy this. Iron Reach is a match made in heaven on shotguns because the downside is -30 stability on a weapon type where stability isn’t particularly important. In addition, this shotgun rolls with Quickdraw, and although it recently got a hard nerf to its ADS speed, 74 base handling (and any boost given by Corkscrew and/or a Handling MW) should make the difference between pre-nerf & post-nerf ADS speed a bit less jarring.

Most players think that 140 RPM HCs don’t stand a chance in the current META due to 120s being so strong, but if you can get a good set of perks on a 140, you shouldn’t have a problem. For the Finite Impactor I would go with Sureshot HCS for the sight, for the magazine option I would say anything is good, personally since this weapon only has 10 rounds at base, I would try to bump that up with Appended Mag.

For the first set of perks, I would go with Slideways to boost the handling and stability while reloading during each slide. On the last column I would choose either Iron Reach or Multi-KC. Combing MKC with Slideways and a larger magazine, and having Sureshot/Range Masterwork, you can really push the limits when it comes to range with this weapon.

The only thing stopping this sniper from being A tier is the zoom. It has a 58 zoom. If you can get used to that, you’re set. It’s a 72rpm which can roll the insane combo of Snapshot/Opening Shot. This combination of insane range + opening shot can lead to some very forgiving heasdshots. Also, 72rpm’s can take advantage of the many damage buffs currently available in game and frequently 1 shot body. Special mention for two perks. First is Iron Reach; you can crank that range up to max at the cost of stability. Second is Elemental Capacitor; by running an Arc subclass you gain a significant boost to handling. Paired with Snapshot and you have a 72rpm sniper that handles like a 140rpm.

Actually a very strong option for PvE activities without champions or if you have champion mods on your primary and heavy, you can easily max out the magazine at 8 with multiple perk options, speed up the charge time, slap on an Adept Big Ones mod, and then get more bonus damage via a multitude of perks in the last slot. For PvP it is slightly worse, but helping stability and damage as much as possible will do wonders for the gun.

PvE – If you are a fan of sidearms, The Vision is a great pick up for PvE content. A reprised FWC Omolon Adaptive Frame, similar to Last Hope from previous seasons, but now with new perks. Ambitious assassin, paired with Tactical or Appended mag can comfortably give you 50 bullets in the mag. Slap on One for All or Swashbuckler in the second perk and boost your damage while mowing down all the little guys. The Vision already comes with very high stability, so focus on perk to increase damage, range, and reload.

This is a weapon that deserves your attention. If you enjoy SMGs at all this is at the very least worth trying out. Phase Mags has not been seen on any randomly rolled weapon in the life of Destiny 2. It first appeared on Omolon SMGs back in year 1, but failed to.make the cut into any random rolls staring in Forsaken. Why do you want to care about this gun? Phase Mag takes the rpm and drops it a tier from 900 to 600.

This also increases the damage from the normal 15 and bumps it up to 25. So you have an SMG with the base stats of a lightweight (bonus movement speed, great handling, decent stability) and the damage profile of a precision frame smg. It’s so very fun. The ideal roll for PvE is either Feeding Frenzy with Dragonfly, or Feeding Frenzy with MultiKill Clip. One will crush groups close together like in horde modes; the other will crush higher health enemies. Always look for Phase Mag, and the really awesome part of Stochastic Variable, is there’s three mag options. That means even you get even more chances to roll a good mag perk. Best of luck Guardians, and Happy Hunting

This is essentially Felwinter’s Lie but instead of Shot Package it comes with better base stats, in particular the handling. As an aggressive frame shotgun it deals 22-23 damage per pellet which is extremely advantageous in Crucible.

PS: You can read all about the Vault of Glass loot table and potential god rolls to chase here.

For the record, as much as we try to keep our tier list as objective as possible, they are still based on our personal experience playing the PC version of the game.

Also, even with a thousand+ hours of playtime, I’m far from being an expert nor an amazing PVE/PVP player. This is why I brought Panda_Pax along, to give you a more educated overview and description of all the new Season 13 weapons!

Finally, if you’re wondering what criteria was used to build this Tier list, these are the main factors taken into account:

If you strongly disagree with some of the rankings here, feel free to share your thoughts in the comments section. By the way, what is your personal Top 3?