Introduced a few seasons ago, Black Armory weapons aren’t the trendiest anymore, but they’re still some of the best weapons in the game.

And I don’t say this lightly. For example, Forge weapons are, in general, head and shoulders above the latest Seventh Seraph weapons. In fact, some of them are still considered top choices for PVE and PVP content.

‼️ Every single one of the Legendary weapons listed below is no longer viable for most activities including endgame content. You can read all about weapon sunsetting here and see a full list of Legendary weapons still viable here.

This guide will cover every Black Armory Forge weapon in the game. We’ll cover both Exotic and Legendary Forge weapons and the best rolls for Legendaries.

The list starts with S Tier and moves down the different tiers until it reaches the bottom D Tier.  Also, don’t forget that you can filter and sort the list however you prefer!

If you’re really serious about chasing god rolls, you know that scope/barrel and magazine options are extremely important too. I realize that but prefer to keep things simple and only focus on the two main perks. I do go into more detail for my absolute Top 3 below.

As with all things D2, when I say the best, I mean the weapons I think are the best. But make no mistake, even if this list is based on my personal opinion, it also takes into account their usage in end-game activities and reviews from the most talented D2 players out there.

For the record, this Top 3 only includes weapons that can be farmed using Weapon Frames (more on that later): 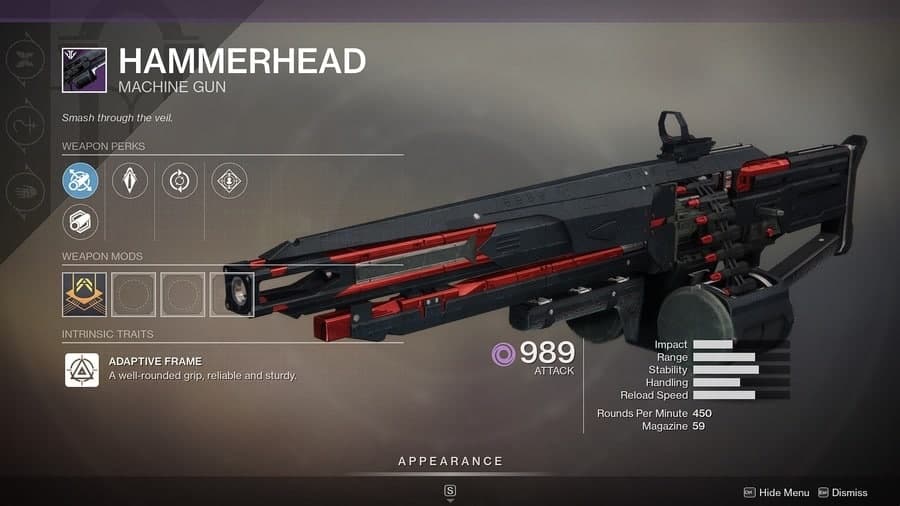 The Hammerhead is not as powerful as it used to be, but it’s still THE most popular Heavy weapon in the Crucible. This is probably because of its insane range and power. A Hammerhead feels like a laser and can dispose of opponents across the map. It also helps that it gets enough ammo in PVP to easily kill two opponents, three if you’re efficient. When it’s all said and done, Hammerhead remains one of the best PVP weapons in the game.

We covered the preferred perks before, and while I have a Feeding Frenzy / Rampage roll, I am currently grinding for a Dynamic Sway Reduction / Rampage in anticipation of the upcoming perk changes. 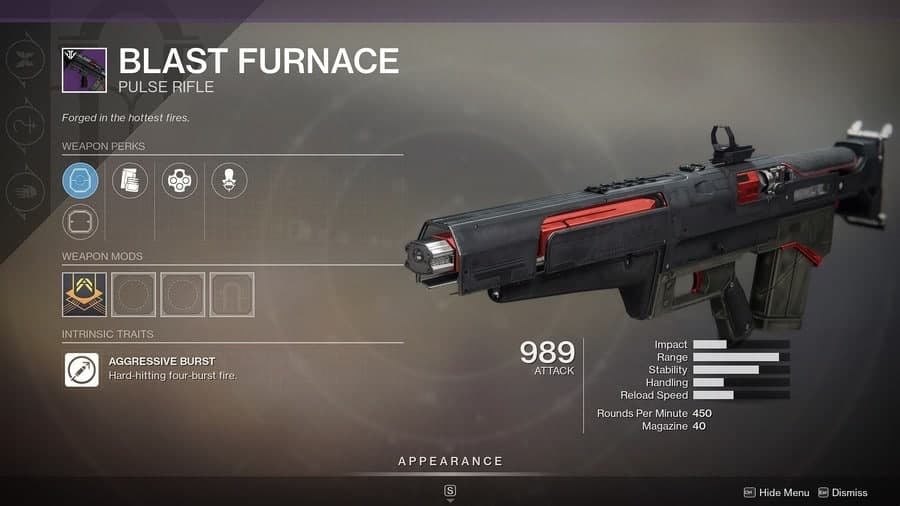 An all-time favorite, the Blast Furnace is an aggressive 4-burst Pulse rifle known for its raw power. In PVE, it can quickly dispose of enemies because of its many damage-based god rolls, while in PVP it causes a lot of flinch and a fast TTK.

The Blast Furnace saw a lot of play last season when anti-barrier mods could be used on Pulses. This season, pulse rifles became less popular for one major reason: The insane buff to 600 RPM Auto Rifles.

That said, high-impact Pulse rifles are still competitive thanks to a recent PVP-only buff. If you’re a fan of pulses, you should definitely take the brand-new Cold Denial for a spin in the Crucible. 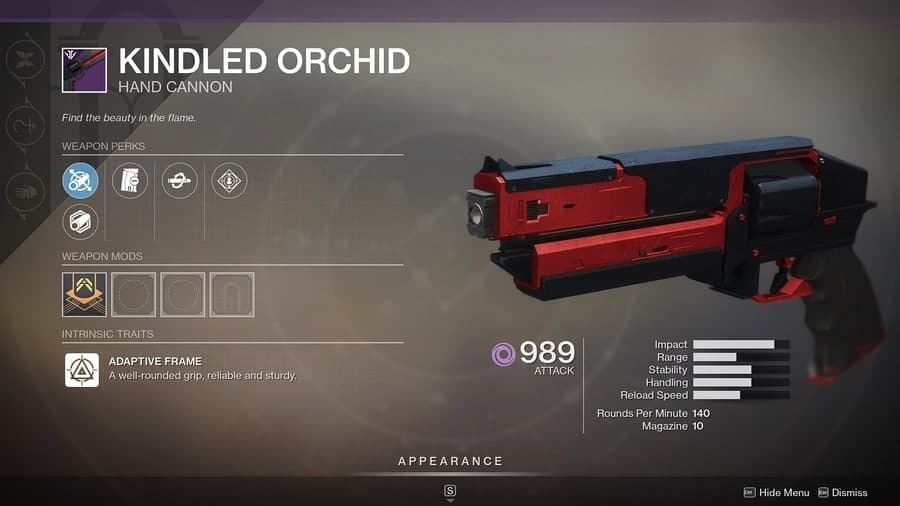 Finally, the Kindled Orchid is another fan-favorite that can excel in both PVP and PVE. In PVE, it’s the only weapon that can roll with Kill Clip and Rampage, making it a beast at killing minors. In PVP, it can hold its own, but it’s hard to compete with the excellent Spare Rations hand cannon from the Reckoning.

In PVP, 140 RPM hand cannons are considered inferior to 150 RPM hand cannons, but the Kindled Orchid is so good, it still sees a lot of usage. This is especially true since the Astral Horizon shotgun was introduced and finally offered a viable alternative to the Spare Rations / Mindbender combo.

Before we get started, there are two different types of Black Armory legendary weapons: those that drop randomly and those that drop from Weapon frames. The column “Drops from” in our Tier list above will tell you where each weapon drops.

Let’s get random drops out of the way. If you want a Galliard-42 XN7568 (which is the only random drop worth the immense grind), I have bad news for you.

The Auto Rifle everybody wants: The Galliard 42-XN7568

It can only drop from Forge completions or killing a Forge saboteur roaming in the open world. In both cases, weapon drop rates are very low. And if you get a weapon, it could be any of the other random drops. And then you need to get a good roll on it.

This means your RNG will be terrible, and in my opinion, not worth the grind, especially with weapon retirement on the horizon. But I have good news. With the exception of the Galliard, all of the best Forge weapons can be easily farmed via Weapon frames.

Ryan Gilliam at Polygon did a great guide on how Weapon frames work. In a nutshell:

2. Grab a Weapon Frame (which is some sort of a quest/bounty)

3. Do the Frame by getting kills with that weapon type, killing powerful enemies and picking the “seeds” they drop. This can be done anywhere, but you can speed this process solo in the Leviathan Raid first section.

4. Take your completed Frame to Ada-1 (a completely useless Step I hope Bungie will remove soon)

5. Complete a Forge to forge the weapon.

How to optimize your farming?

So there you have it. Chose the weapon you want to chase, grab that Weapon Frame as soon as the week resets and grind away!

Destiny 2 Black Armory Exotics: How to get them

Chasing the Black Armory Exotics is an entirely different affair. We cover every exotic quest in Destiny 2 in this guide, but these are the detailed steps on how to acquire all 3 Black Armory exotics mentioned before:

Acquiring both Jotunn and Le Monarque used to be a pain. But with the release of Shadowkeep in September 2019, the process has been streamlined and made easier.

Diego Arguello at Eurogamer does a great job explaining the new process. In summary:

1. Grab the two Exotic quests from Ada-1 at the Tower.

2.  Get the kills needed (the easy part)

3. Forge 10 Legendary frames (the long part): This step often leads to confusion. To complete it, you’ll need to:

To be clear, these quests are not difficult, they’re just long and grindy. This is especially true because forging Legendary frames requires you to find Weapon Cores which drop from forge saboteurs. If you’re having issues with that step, this video explains the process.

Getting Izanagi’s Burgen is both long and difficult. This is a process that can take weeks and will require a fireteam for a step or two. But trust me, it’s worth it. Izanagi’s Burden is still one of the best exotics around.

There’s no point explaining the process here, as Datto’s video is excellent.