Located on the Moon, the K1 Crew Quarters Lost Sector is just worth farming unless you really need the Exotic. It is of average difficulty but is much too long compared to some of the other Lost Sectors on rotation.

While our Lost Sectors hub features every Legend and Master Lost Sectors in the game, this K1 Crew Quarters guide covers everything you need to know to prepare, including recommended loadouts, shields, and champions. 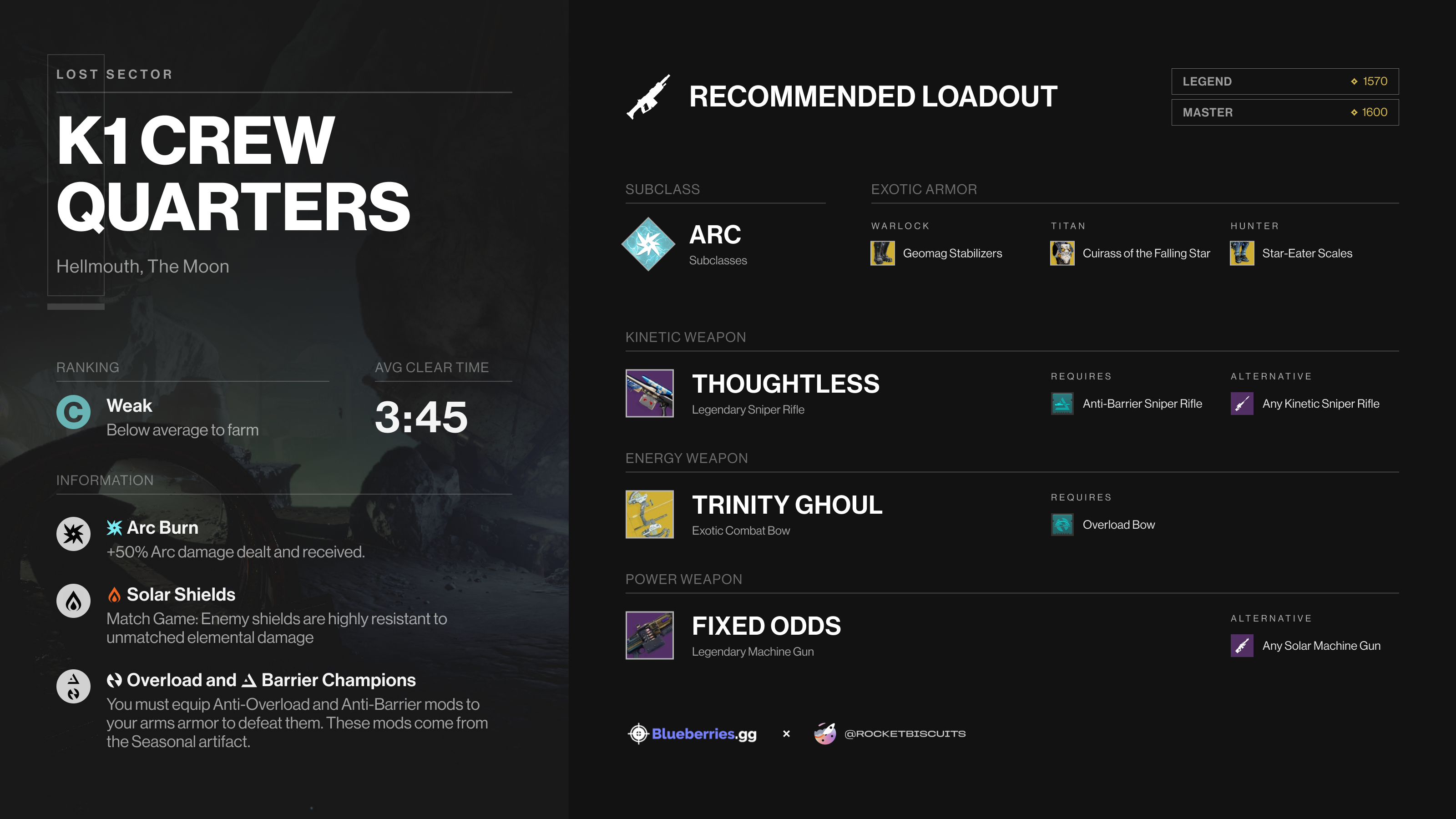 The K1 Crew Quarters Lost Sector is located in Anchor of Light, on the Moon.

How to unlock Legend & Master Lost Sectors? You’ll need to complete the normal version of the Lost Sector and reach 1510 Power Level to even see them in the Director.

This is an overview of what Burn, enemies, and overall difficulty you should expect in this Lost Sector:

These are the types of Champions you’ll have to deal with:

Difficulty: K1 Crew Quarters is considered below average to farm, in terms of enemy difficulty and time to complete.

During Season of Plunder (S18), the best loadout is the following:

With a Kinetic Sniper, you’ll have Anti-Barrier Rounds to break the Barrier Champions’ shields. That’s about all you’ll use it for. A very good Sniper Rifle to use is Thoughtless, which you can craft at the Enclave.

Your main weapon will be Trinity Ghoul because of Arc Burn. The damage Trinity Ghoul does is buffed and slays through 90% of the Lost Sector like butter.

Finally, use any legendary Solar Machine Gun. This is still really effective at Champion and Boss DPS. However, quickly eliminating Solar-shielded Shanks is what makes this what we recommend. Fixed Odds from the Season of the Haunted or Thermal Erosion from Europa are both perfect choices.

Make sure to equip these mods for easy runs:

Needless to say, these aren’t easy and the least you should do is ensure you have a reasonable Power Level. By reasonable, we mean no less than 10 Power Levels below the recommended levels. If you find yourself struggling, work on increasing your Power Level as much as possible and focus on Legend Lost Sectors.

The K1 Crew Quarters Lost Sector is a slightly below-average lost sector. Many will argue it’s one of the worst because of the Arc Burn. Arc Burn increases incoming Arc damage you receive and outgoing Arc damage you deal to enemies. When almost every enemy deals some sort of Arc damage, you may be losing health faster than you’re used to.

For farming exotics, it’s not the greatest. On average, you’ll be looking at runs that take 3 – 6 minutes. If you’re unfamiliar with the lost sector, it may take even longer.

To prepare for K1 Crew Quarters, you’ll find a bunch of Solar-shielded Shanks, a couple of Barrier Servitors, and a few Overload Captains. While I agree that the Moon’s Lost Sectors are the worst in Destiny 2, K1 Crew Quarters can actually be enjoyable. However, it’s only fun when SMGs and Bows have Anti-Champion mods available.

With those Anti-Champion mods, two of the best Arc Exotics in Destiny are extremely fun. Riskrunner and Trinity Ghoul do so much damage because of Arc Burn. Their Arc-chaining simply rips through enemies.

There are a couple of places where most people have trouble in the K1 Crew Quarters lost sector. The first is with Overload Champions. The Overload Captains can be unpredictable with their multiple teleports. For most Overload weapons, you need to land continued shots on the Champion to stun them. You need to be quick to land enough shots for the stun.

Another area many players have trouble with is being overwhelmed with enemies. Especially in the middle of the lost sector where enemies will surround you. Using an Arc primary weapon is strongly recommended here. Your Arc weapons deal more damage making it a lot easier to kill enemies quickly. The faster you kill these enemies, the easier it is to survive.

If this guide had too much information and you can only remember one sentence, these are the highlights:

Featuring an Arc burn modifier, The K1 Crew Quarters Lost Sector features Solar-shielded enemies and Overload and Barrier Champions. Due to its length to complete, this is an average Lost Sector to farm.

Hopefully, you now have everything you need to know how to best clear this Lost Sector to farm exactly the type of Exotic armor you need.